A Portrait of an Ordinary American and His Dreams 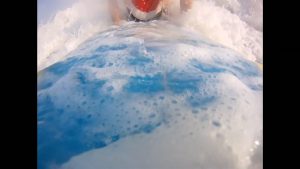 This film began as an idea to make a documentary that featured an ordinary American as its main subject. Rather than focusing on a large dramatic story or a social issue, my concept was to allow an audience to experience the humanity of an individual living a mainstream lifestyle in America.

I met Bekir, a Turkish immigrant in the U.S., who fit this description and was learning filmmaking in order to fulfill his dream of making Hollywood-style action movies. Over a year, we worked together as I filmed his day-to-day activities.

Along the way, I realized that Bekir was basically living a lifestyle common to many people in industrialized nations and could dispel myths that other Americans might have about immigrants and Muslim men from the Middle East. His community, little seen in mainstream media, was the same as my parents—the diaspora of middle class international immigrants in the U.S.

Bekir is a middle class immigrant from Turkey in the U.S. He dreams of making a blockbuster film that will take care of him materially. He faces various misadventures, diversions, and doubts, yet persists in continuing to learn, take action, and embrace life. Along the way, he finds his sense of accomplishment and connection through daily life activities, friends, family, and the environment.

Bekir also subverts the filmmaker-subject relationship. Initially, he is excited about the possibilities of being the subject of a documentary, and he contributes to the filmmaking process with his directing and his own footage. But he begins to doubt the value of this relationship, which changes drastically by the end of the film.

A mix of cinema verite with experimental film techniques along with Youtube video styles and mumblecore influenced scenes blend to create the aesthetic approach. The film is shot in an intentionally amateur look to convey the essence of working with inexperienced filmmakers.

The film blends several visual styles in order to convey the idea that we are viewing Bekir through new eyes, in a way that is not stereotypical or expected.

This film is currently in distribution.